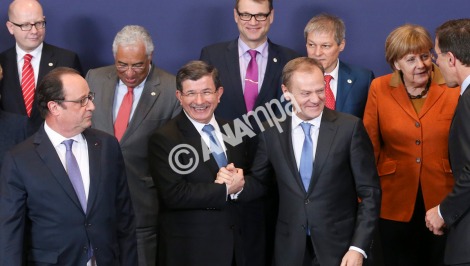 “We agreed that all irregular migrants coming from Turkey into Greek islands from this Sunday the 20th of March will be returned to Turkey,” EU Council President Donald Tusk announced Friday after the two-day meeting.

This agreement comes after an influx of migrants and refugees, primarily from war-town Afghanistan and Syria arriving on Greek Islands from Turkey via the Aegean Sea. Dozens have died at sea at the hands of human smugglers and at least 46,000 are stuck in Greece according to the latest numbers from Greek authorities. The Former Yugoslavic Republic of Macedonia has sealed its border with Greece, forcing many to remain in Greece rather than moving to other European countries.

“Our agreement complies with all EU and international law,” Tusk said. “This includes the respect for the principle of non-refoulement and it excludes any kind of collective expulsions.”

The meeting with Turkish Prime Minister Ahmet Davutoglu focused on plans to halt the flows from Turkey to the Greek islands via the Aegean Sea.

“Turkey will be getting all those who are crossing to Aegean Islands Illegal, but meanwhile European countries will receive the same number of legal migrants from Turkey,” Davutoglu said.

The plan includes at least 3 billion euros in aid for Syrian refugees in Turkey, a lift on EU visa travel restrictions to Turkish citizens and re-opening the case to admit Turkey to the European Union.

The first draft of the agreement met criticism by EU states including Greece Cyprus, who opposed the re-opening of the case to admit Turkey to the European Union. The lingering dispute between Turkey and Cyprus remains one of the major barriers to Turkey’s admission to the EU.

“Today we have a balanced proposal that takes on both Cypriot concerns. When it comes to accession talks with Turkey, we agreed to open Chapter 33 during the Dutch Presidency based on the commission’s proposal to be presented in April,” Tusk said.

Greek Prime Minister Alexis Tsipras said it  was a “difficult agreement,” and that Turkey’s “unreasonable demands” regarding the Cyprus dispute were removed from the final plan.

“We achieved the best that we could achieve with respect to the refugee issue and must now work hard to cope with this difficult crisis we are facing,” Tsipras said in a press conference following the meeting.

“While we fully understand the need to effectively address this unprecedented migration crisis, it must be crystal clear that the migration crisis and the accession negotiations of Turkey are two distinct processes,” Anastasiades said in a briefing Friday.

One response to “EU-Turkey migration agreement reached; Europe to send migrants, refugees back to Turkey for legal relocation to EU”