“It’s an assault of human rights and it’s a threat to global stability,” Kerry said Monday at the annual meeting of the President’s Interagency Task Force to Monitor and Combat Trafficking.

U.S. officials across agencies reaffirmed their commitment to combating trafficking in persons, including following the recommendations of the Advisory Council on Human Trafficking, which released its report last week. 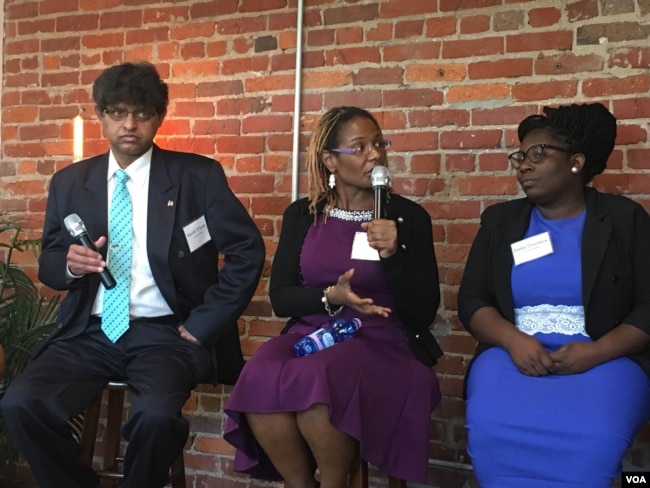 FILE – Three members of the 11-member U.S. Advisory Council on Human Trafficking discuss their first report, which was released in October. (S. Herman/VOA)

Inter-agency, as well as international partners, including Mexican officials with the U.S. at the U.S.-Mexico border, are crucial in the effort to fight global human trafficking.

“One of the most important issues facing not just our country, but so many countries today, is of course the scourge of human trafficking,” said U.S. Attorney General Loretta Lynch, who called it “One of the most invisible, yet most pernicious crimes that crosses borders.”

Director of Homeland Security Jeh Johnson announced the extension of the “continued presence status,” to be renewed for up to two years. That’s an increase from one year. The status allows non-citizen human trafficking victims to remain in the U.S. during the investigation of their trafficking case.

“Acting together, we are expanding our enforcement efforts and in fact not only prosecuting more traffickers, but rescuing more survivors,” Lynch said.

In 2016, the FBI completed 1,894 investigations, made 2,600 arrests and rescued more than 1,000 children in cases of human trafficking. The FBI’s efforts, Director James Comey said, are focused on defending civil rights and rescuing children.

“We are making sure that throughout all of our offices, we are treating these people, whether children or adults, like the victims that they are and getting them the care and services that they need,” Comey said.