A record 800 congregations have opened their doors to serve as sanctuaries for undocumented immigrants and other vulnerable populations, doubling from about 400 before President-elect Donald Trump’s election, according to a coalition of faith communities called the PICO National Network.

“We are seeing more and more congregations joining the sanctuary movement, opening their doors to undocumented people, as well as to their Muslim neighbors, and as well to those who might be attacked,” said Bishop Dwayne Royster during a press call Tuesday.

The bishop added that the growth of the movement is “a powerful tool to resist the harsh, xenophobic and the discriminatory policies proposed by the Trump administration.”

Trump has not yet proposed any policies, although he has said he would deport 2 to 3 million people who “have criminal records.” In the past eight years, a record 2.5 million people have been deported under President Barack Obama. 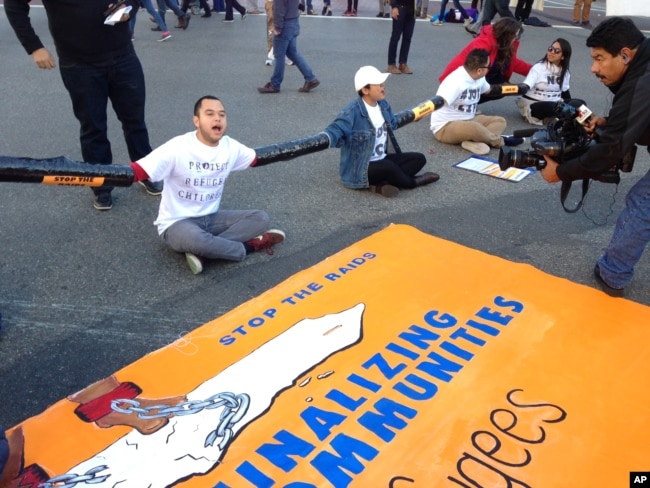 FILE – Immigration activists participate in a sit-in protest against the raids and deportation of immigrants near the downtown Los Angeles Federal Building, Jan. 26, 2016.

Sanctuaries serve as safe spaces to stay for people with pending deportation orders.

Currently, five people are staying in sanctuary in coalition churches as they fight to stop Obama administration deportation orders in Denver, Philadelphia, Phoenix and Chicago, which has two cases.

Ingrid Encalade Latorre came to the U.S. from Peru in 2000 and for seven weeks has been staying with a sanctuary congregation in Denver, Colorado. She is undocumented and since 2010, she has been facing deportation after pleading guilty to working with someone else’s papers.

“I feel grateful and thankful to be able to be here and to continue to be here with my family while I fight my deportation order,” Latorre said in the press call, translated from Spanish. 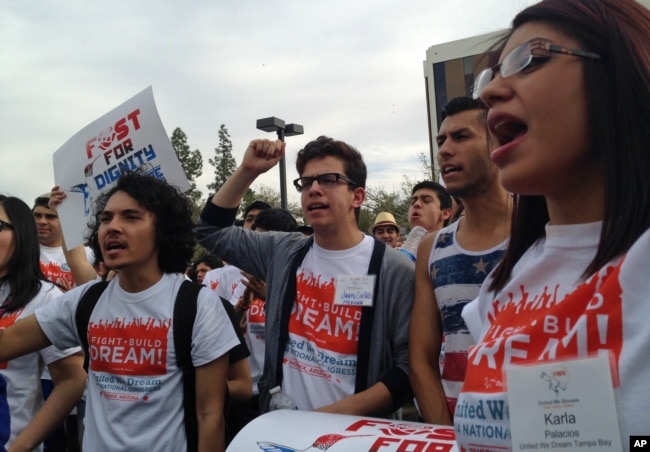 FILE – Youth from United We Dream chant slogans calling for an end to deportations outside the Immigration and Customs Enforcement (ICE) offices in downtown Phoenix, Feb. 22, 2014.

“We confer this special privilege on, in many cases, dangerous, violent criminals because they came here illegally,” said Toomey, who has proposed legislation that would strip cities of federal development assistance if they fail to cooperate with federal authorities.

The impact of his bill, called the “Stop Dangerous Sanctuary Cities Act,” would fall mainly on low-income neighborhoods that rely on the federal aid for affordable housing and public services.

But not knowing what Trump is going to do may have led some churches to fear the worst.

“United Methodists have been involved in sanctuary for several decades but never 60 congregations,” said Bishop Minerva Carcano, spokesperson for United Methodist Church Bishops. “It’s been a congregation here and there across the country, but 60 is significant; it’s an exponential increase.”

U.S. Immigration and Customs Enforcement (ICE), the federal agency that executes deportation orders, has an unofficial practice of not going into churches or hospitals, making churches a safe space.

“Our very own congregations are concerned about their immigrant neighbor,” Carcano said. “About the immigrant that just joined their church or who has begun to visit, the immigrant who comes into their lives, and they themselves are stepping up and saying, ‘What can we do?’ And sanctuary has become one of those really deep, faith options for our congregations.”

These congregations have also opened their doors to Muslims who may feel threatened by Trump’s talk of a Muslim registry or other heated rhetoric.

“Sanctuary for me has been like a gift,” Latorre said. “I feel that there is so much union and solidarity, and I don’t feel so alone in fighting my case anymore.”

Ramon Taylor contributed to this report.