“That was the first time I had actually seen the children really calm,” Martinez said. “And I realized that this is something that they really love to do.”

As a flight attendant for United Airlines, Martinez is often in Greece, where she was drawn to the refugee camps and began volunteering there in 2015.

Focusing her efforts on Nea Kavala in northern Greece, she is now the first point of contact for many families in need.

“It’s very, very actually challenging to be able to leave Greece, because you have urgent needs every day,” she said. “Every day you have a family writing to you.”

The paper and pens presented a whole new opportunity. Martinez put one of the pieces of art on Facebook and instantly received offers to purchase it. Since then, Martinez has provided canvases, watercolors, pencils, markers, calligraphy paper and sketchpads to adults and children in the refugee camps.

She collects their art and takes it to cities around the U.S. and Europe, selling each piece for $25 to $150. She then uses the money to help the refugees in the camps through her new organization, Love Without Borders — for Refugees.

Many of the pieces sold are from children as young as 3.

“I’m really focused on what the children want to draw, more than telling them what they need to draw, because they have a lot of feelings, a lot of trauma that hasn’t been worked out,” Martinez said. “So, we just let them take their time and draw whatever they would like.”

Many of the pictures displayed at a recent show in a small gallery in Washington were done in black and gray. The young artists drew their homes burning, their cities being bombed, their families crying.

“There was one that was kind of a row of buildings and a bomb above it — ‘Syria,’ ” said Niyati Shah, who attended the art show. “This is what this kid sees every day. You see it in the news, but then you see children’s depiction of their reality, and it’s certainly moving.”

Other pictures were colorful and bright, showcasing the hope and resilience of the refugee artists. Each piece had an accompanying note about the artist, telling his or her story

“It’s just also nice to be somewhere where you’re not just getting the tragic images, but it’s kind of a more positive way and constructive way to look at the conflict,” said attendee Julieta Jakubowicez. “Very humanizing.”

Martinez sold 122 pieces of art in three hours, about 60 percent of the collection she brought with her from Greece. She raised $17,503, most of which will go back to the refugees. 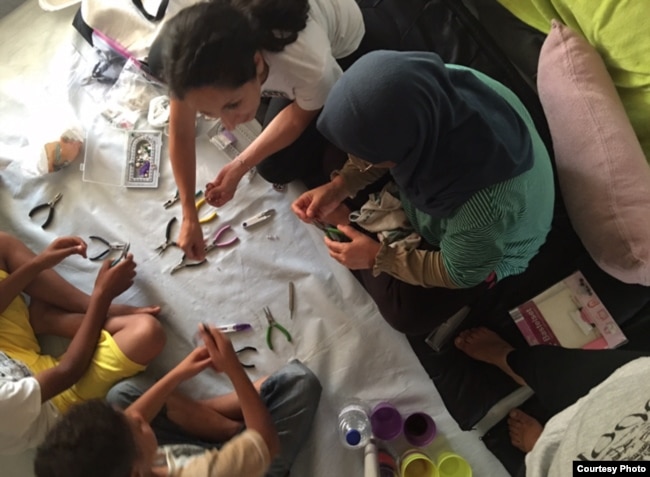 Kayra Martinez works with refugees in her home in northern Greece. (Courtesy photo)

At least one of the refugees Martinez helps was an accomplished artist before being displaced by war.

“And now he’s having his first exhibition in Greece. We’re selling his art all over the U.S.,” Martinez said. “It got back his independence. He’s empowered, he’s motivated, and also he can now create a better environment for his family when he has his own money.”

In addition to providing cash to refugees, Martinez also teaches them how to make jewelry and baby clothes to sell so they don’t have to rely on fickle government and NGO services.

“They are really tired of having to ask for everything and then be disappointed at the end by not getting it,” Martinez said.

Filling in the aid gaps

Since the beginning of the Syrian civil war, hundreds of thousands of refugees have arrived in Greece. Many continued to other countries in Europe, but many remain — something Greece was not prepared for.

Despite financial assistance from the European Union, Martinez said, help from large aid organizations was not getting to the refugees. Volunteers and smaller organizations, including Love Without Borders — for Refugees, fill in the gap.

“We’re doing a lot of work that a lot of organizations cannot do, but we are very innovative. We have a lot of ideas, and we’re a little bit more independent to be able to make things happen a lot quicker,” Martinez said. 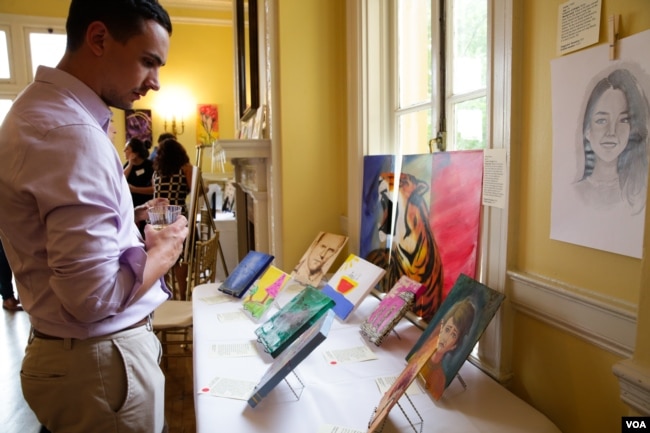 More than 150 pieces of art made by refugees from Greece were part of the collection at Love Without Borders – For Refugees’ art show on Thurs., Sept. 16 in Washington D.C. (N. Papadogiannakis/VOA)

She volunteers with refugees and hosts art show fundraisers around the world, while still working as a flight attendant for United.

“I think basically I’ve given up my social life. I don’t go out with my friends anymore,” Martinez said. “I don’t; I can’t.”

She doesn’t sleep much, but she doesn’t regret anything.